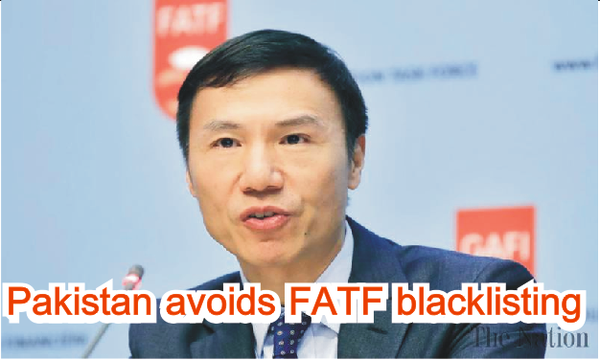 ISLAMABAD/PARIS    -   Pakistan has avoided being blacklisted by the Financial Action Task Force (FATF), thanks to the staunch support by Turkey, China and Malaysia. The country however will remain on the ‘grey list’ until February 2020, the Plenary Meeting of the global money-laundering watchdog announced on Friday. The friends of Pakistan reportedly put their weight behind Islamabad and counted the steps it had taken to counter money laundering and terror financing, thereby frustrating India’s efforts to damage Pakistan’s interests. The FATF meeting held in Paris from October 13 to 18, acknowledged some concrete steps taken by Islamabad recently but directed it to take more measures and move swiftly for complete elimination of terror financing and money laundering. The decision to keep the county on the grey list means that Pakistan will escape the tough sanctions on its banking system that would have accompanied any downgrade to the FATF blacklist.

The International Monetary Fund had warned that moving Pakistan to the blacklist could cause capital inflows to freeze up and jeopardize its $6 billion program agreed to in May. “Thank God, we have been successful,” Foreign Minister Shah Mehmood Qureshi, told a foreign news agency after the announcement of FATF decision. Currently, only Iran and North Korea are on FATF blacklist. In its recent meeting, the Task Force threatened Iran with even tougher restrictions on its international financial activity.

Expressing “disappointment” that Iran isn’t taking the necessary steps to be removed from the blacklist, the watchdog said it’s asking all member countries to tighten scrutiny of any financial transactions involving Iran. Virtual currencies such as bitcoin and Facebook’s Libra are also prompting concern from the FATF, which warned of “new risks” from such products. It said they’re being “closely monitored” to ensure they’re not used to finance terrorism or launder money. Earlier, the plenary session considered Pakistan’s progress report on the FATF Action Plan and Pakistan’s Mutual Evaluation Report (MER) with Asia-Pacific Group on Money Laundering (APG). It decided to maintain status quo on the Action Plan and allow the usual 12 months observation period for the APG MER.

The Pakistan delegation was led by Minister for Economic Affairs Division, Muhammad Hammad Azhar, a finance ministry press release Friday said. Pakistan’s delegation reaffirmed its political commitment to fully implement the Action Plan. The delegation also held sideline meetings with various delegations and briefed them about the progress made by Pakistan on the FATF Action Plan and steps taken for strengthening its AML/CFT framework. A session on technical assistance and training needs of Pakistan was also organized in collaboration with UNODC and APG Secretariat which was attended by a number of interested countries and multilateral agencies including China, USA, UK, Canada, Japan, EU, World Bank, IMF, ADB, and UNODC.

Pakistan has been on the global money laundering watchdog’s radar since June 2018, when it was placed on a grey list, after an assessment of the country’s financial system and security mechanism. The move backed by the US, the UK, and Pakistan’s arch-rival India was opposed by Turkey. Islamabad’s long-time ally, China abstained. In recent months, Pakistan acted in accordance with the action plan, which includes measures like no foreign currency transactions without a national tax number, and ban on currency change of up to $500 in the open currency market without submission of national identity card copy. Islamabad has also proscribed several militant groups and seized their assets.

The 36-nation watchdog agreed in the recent meeting that Islamabad had made progress towards implementation of the action plan -- negotiated between Pakistan and the FATF members -- in June last year but still sought “effective prosecution” in this connection, local media reported quoting unnamed foreign ministry officials.

“Since June 2018, when Pakistan made a high-level political commitment to work with the FATF and the Asia-Pacific Group to strengthen its anti-money laundering and counter terror financing regime and to address its strategic counter-terrorist financing-related deficiencies, Pakistan has made progress,” observed the FATF meeting.

FATF however said the country has until February to improve its counter-terror financing operations in line with an internationally agreed plan or face actions against it, failing which could result in its blacklisting.

“The FATF strongly urges Pakistan to swiftly complete its full action plan by February 2020,” it said in a statement. “Otherwise, should significant and sustainable progress not be made across the full range of its action plan by the next Plenary, the FATF will take action.” Pakistan has been asked to swiftly complete its full action plan by February 2020 and failure to do so can lead to a downgrade to the blacklist, FATF President Xiangmin Liu said at a briefing on Friday at the end of the plenary meeting. Pakistan has only largely addressed five of 27 action items, with varying levels of progress made on the rest of the action plan, according to a statement. Despite a high-level commitment for Pakistan to fix these weaknesses, it “has not made enough progress.” said Liu. “Pakistan needs to do more and it needs to do it faster.” But, Foreign Minister Qureshi insisted that Pakistan has “taken maximum steps against terror financing”. He added that “we will continue to take all the required steps, and all conspiracies against us have failed.”

Some experts believe that retention on the grey list also would have negative consequences for Pakistan as every international financial transaction with the country would be closely scrutinized and doing business in Pakistan would become costly and cumbersome. Moreover, international agencies could place restrictions on lending money to Pakistan, including key creditors such as the International Monetary Fund, the Asian Development Bank and the World Bank. “FATF is pressuring Pakistan so that it can bring the Taliban to a peace settlement. The ‘black list’ threat is being used to force Pakistan to serve American interests,” said an analyst. The breather Pakistan has gained however is likely to disappoint neighbour and rival India, which has long argued and lobbied at previous FATF meetings that Pakistan belongs on the blacklist.