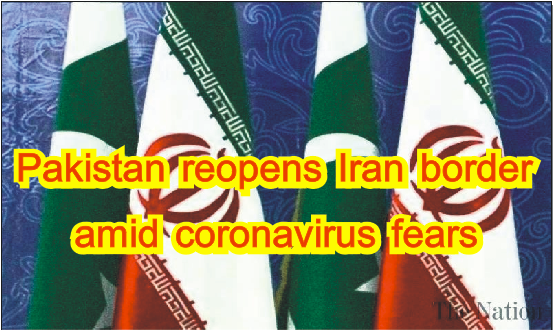 Pakistan on Friday reopened its border with neighboring Iran, allowing hundreds of its stranded citizens to return to the country, officials and local media reported. “We have reopened the border to allow our citizens to enter [the country] in batches,” Liaquat Shahwani, a spokesperson for the government of southwestern Balochistan province that borders Iran, told Anadolu Agency. The first batch of more than 300 stranded citizens had been allowed to return to the country after the full screening, Shahwani said, adding that more batches would be allowed to enter in the coming days. “Those, who have touched the virus-hit areas in Iran, are being quarantined until they are declared clear. Whereas others are being allowed to go but after full screening”, Shahwani said.

Footage aired on local broadcaster 92 News showed hundreds of stranded Pakistanis standing in the queues, and waiting to be screened for coronavirus at the border town of Taftan, located 630 kilometers (391 miles) from Quetta, the capital of Balochistan. Thousands of Pakistanis, mostly Shia pilgrims visit Iran via the Taftan border every year. A 100-bed tent hospital has been set up at Taftan for the screening of pilgrims coming from Iran. Pakistan, earlier this week, had suspended its road, air and rail links to Iran following confirmation of the first two coronavirus cases in the country, one each in Karachi and Islamabad. The patients, who are now "stable and improving", according to the Special Assistant to Prime Minister on Health Zafar Mirza, recently returned from Iran.

The confirmation propelled the authorities to screen hundreds of pilgrims recently returned from Iran. Murtaza Wahab, a spokesperson for the Sindh government, of which Karachi is the capital, told a news conference on Friday that nearly 600 Pakistanis, who recently visited Iran, tested negative. The provincial government also announced the reopening of schools from Monday. However, all the educational institutions in Balochistan will remain closed until March 15. The global death toll is over 2,800, and China, where the outbreak originated, is the worst-affected, with more than 78,000 cases and over 2,700 fatalities. The World Health Organization has declared the outbreak an international health emergency.