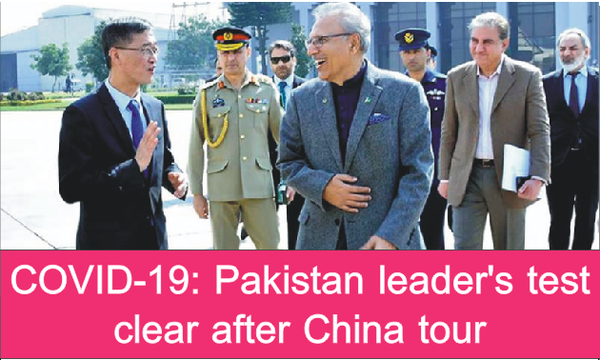 Pakistan’s president, foreign minister, and 16 other members of a delegation that visited China earlier this week have tested negative for coronavirus, the Chinese Embassy in Islamabad announced on Wednesday. "All 18 members of the official Pakistani delegation, including the crew members who visited China on March 16-17, had received COVID-19 tests, in both throat swab and blood test forms, in China twice, and the results of all tests of every member are negative,” the embassy said in a statement. President Arif Alvi, Foreign Minister Shah Mahmood Qureshi, and Federal Minister for Planning Asad Umar were part of the delegation that was in Beijing for two days.

The number of confirmed coronavirus cases in Pakistan rose to 269, with 189 in the southern Sindh province alone, officials said on Wednesday. Health officials said new cases were reported in the northeastern Punjab, southern Sindh, and northwestern Khyber Pakhtunkhwa provinces. Most of the new patients had recently returned from neighboring Iran, which has the highest number of cases and deaths after China and Italy.

The virus emerged in Wuhan, China, last December, and has spread to at least 164 countries and territories around the globe, according to the World Health Organization (WHO). WHO has declared the outbreak a pandemic and its data showed there were over 194,000 confirmed cases and nearly 7,900 deaths around the world by Wednesday evening. COVID-19, the disease caused by the new coronavirus, is not fatal in all cases and a vast majority of patients do fully recover.