Driver charged over deaths of 39 people in UK lorry: police 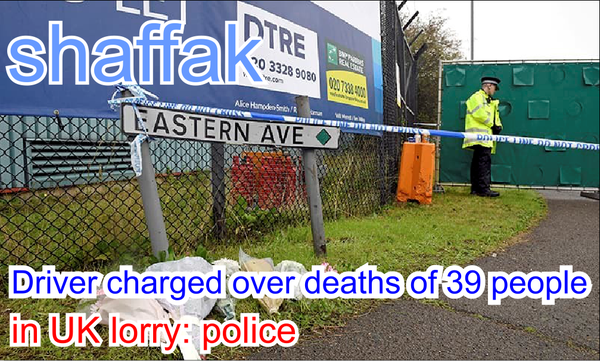 LONDON: British police investigating the deaths of 39 people in a refrigerated truck said on Saturday they had charged a driver arrested at the scene with manslaughter and people trafficking. Maurice Robinson, 25, from Northern Ireland, faces “39 counts of manslaughter, conspiracy to traffic people, conspiracy to assist unlawful immigration and money laundering”, police said. Robinson was arrested shortly after the bodies were discovered in the truck at Purfleet on the River Thames estuary, after arriving on a ferry from the Belgian port of Zeebrugge early on Wednesday.

He will appear in court on Monday, Essex police said.

Three other people have been arrested in Britain in connection with the investigation, on suspicion of conspiracy to traffic people and manslaughter. They remain in custody.

On Saturday, Irish police announced another arrest at Dublin port, of a man in his early 20s from Northern Ireland.

More Vietnamese citizens are feared among 39 people found dead in a refrigerated truck in Britain this week, families and community organisers said, after the tragedy laid bare the risks of illegal migrant routes to Europe.

British police initially said all 31 men and eight women found in a lorry in an industrial park in Essex this week were believed to be Chinese. But several Vietnamese families have come forward saying their relatives went missing on route to Britain, a prime destination for Vietnamese migrants seeking better lives abroad.

All of the families come from impoverished and remote corners of central Vietnam, a hotspot for migrants embarking on dangerous journeys and lured by promises of earning quick riches overseas. Many are smuggled illegally through Russia or China, often indebted tens of thousands of dollars and carrying falsified documents, and end up working off the books on cannabis farms or in nail salons.

Five people have been arrested in the UK in connection with the tragedy, which sparked the largest murder probe in Britain in almost 15 years. Several families said they feared their relatives were among the dead.

In central Ha Tinh province, the father of 20-year-old Nguyen Dinh Luong said he received a call from a Vietnamese man in the UK this week saying his son had died en route to Britain. “I fell to the ground when I heard that,” Nguyen Dinh Gia said. “It seemed that he was in the truck with the accident, all of them dead.” Britain-based community group VietHome said it had received “photos of nearly 20 people reported missing, age 15-45” from Vietnam.

Twenty migrants were found in good health in two separate trucks in Belgium on Saturday, according to local prosecutors. Eleven African men, women and children — mainly from Eritrea — were found in a truck in the city of Saint-Trond, 65 kilometres (40 miles) east of Brussels, the Limbourg prosecutors said. The truck, en route to the United Kingdom, stopped for a mechanical problem at a garage when the migrants were found.

Meanwhile, police also found nine men hidden in a truck in Bruges, in northeastern Belgium, en route to the port of Zeebrugge. The men, who said they were Iraqi nationals, were also found in good health, according to the prosecutor of West Flanders quoted by the Belga news agency.

Because of its proximity to the UK, Belgium is frequently used as a route for migrants and trafficking networks.

Thirty-nine people were found dead this week in a refrigerated truck near London whose container had arrived from Zeebrugge. Five people have been arrested in connection with the case.