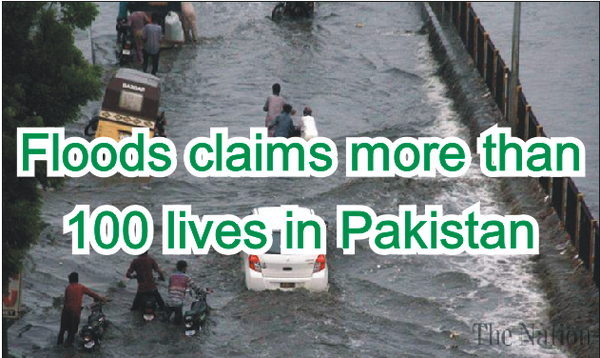 Dozens of people have been killed in accidents and floods caused by torrential rains that have lashed Pakistan for days on end, officials said. Precipitation reached record levels in Karachi, the country’s largest city, where waist-deep rivers of trash-strewn floodwater swept down streets and into homes and businesses.

Eighteen people died in the southern city on Thursday “in various rain-related accidents,” a police spokeswoman said. A record 230mm of rain was recorded in Karachi, home to about 20 million people, compared to the average of 130mm for the time of year, the city’s meteorological service chief said.

The monsoon, which usually lasts from June to September, is essential for irrigating crops and replenishing water supplies across the Indian subcontinent, home to one-fifth of the world’s population. But each year, the intense rainfall also brings a wave of destruction. In total, floods killed 103 people in August in Pakistan, including 54 in Karachi, 33 in Punjab and 16 in Khyber-Pakhtunkhwa, according to official figures.