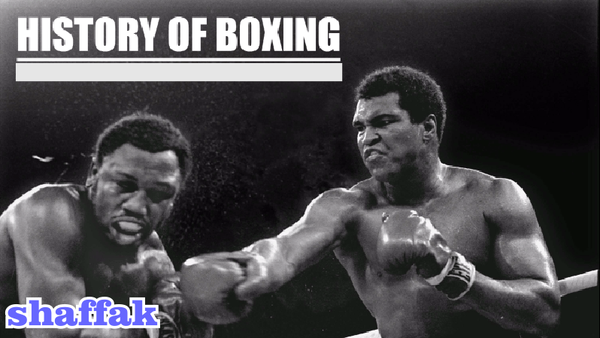 Fighting is a natural instinct. It’s part of being human. We’ve fought, in one way or another, since the dawn of time.

No one knows for sure when it was discovered that a fist was an effective weapon for clobbering your fellow man. However, the ancient Greeks can lay claim to being the first to box for amusement when good ol’ fisticuffs was introduced as an Olympic game in BC 688.

A Sport For Gladiators and Slaves

The fights were held in huge amphitheatres and would attract crowds in their thousands. Top gladiators would have been the Mayweather’s and Pacquio’s of their day – revered and sought after for their ability and showmanship.

However, as advanced a civilization as the ancient Greeks were, boxing at the time was nothing more than a barbaric cock fight. Cheering crowds called for blood and guts and victory in the colosseum often meant killing your opponent.

Many of the fighters were slaves who fought for their freedom or were spurred on by promises of gold, women, livestock and other treasures.

Although leather straps were provided to protect the hands and forearms, a thirst for blood soon called for these early boxing gloves to be fitted with studs, spikes and blades. Anything that could slash, bruise, pummel and kill was taped to the hands.

It took until AD 393 for a humanitarian light to be cast on the spectacle, which forced boxing to be eradicated for its extreme and unnecessary brutality.

Boxing lay dormant for centuries and it wasn’t until the early 16th century that it emerged once again, this time in England. This new era of boxing, or prize fighting as it came to be known, was more civilised than the fight-to-the-death bouts of Ancient Rome, but was still a chaotic scrap at best.

The first recorded boxing match in history took place on 16th January 1681, when The Duke of Albemarle arranged for his butcher and butler to face-off using only their fists. It is unknown whether this was purely for the Dukes amusement, or if there was a genuine dispute to be settled.

Dirty boxing techniques – wrestling, kicking, head butting, low blows, eye gouging and even biting - would have been prevalent during the first bare-knuckle fights. Fists were not the only weapon used, and bouts were also settled by fencing and stick fighting.

The only real difference between bare-knuckle boxing and street fighting, was the rule not to strike a fighter on the ground. Although, no one can say for certain that this was always observed.

There was no referee, no weight divisions, and rounds didn’t exist. In fact, the longest recorded bare-knuckle fight went on for a gruelling 6 hours and 15 minutes!

James Figg is recognised as England’s first bare-knuckle champion. He held the title from 1719 to 1730 in which time he fought an impressive 270 times, winning all but one of his fights (although record keeping of the day was somewhat sketchy).

Later in his career, Figg opened a school where he taught boxing, fencing and quarterstaff (fighting with sticks). His greatest protégé, Jack Broughton, would later go on to do great things for boxing and influence the sport to something that loosely resembled its modern day form.

Historical records show that it was around this time that the term “boxing” first came into circulation.

The Emergence Of The Sweet Science

In 1743, bare knuckle boxing champion, Jack Broughton, published a set of rules that would instil order and lessen the barbarity of boxing. Legend has it that a particularly horrifying boxing match in which he killed his opponent, stirred him to take action.

Broughton’s rules cleaned up boxing and forbid many of the dirty, un-gentlemanlike moves previously allowed. Fights now took place in a squared-off arena, consisted only of punching, and were stopped if a fighter was knocked down and was unable to continue.

Broughton also introduced the first boxing gloves(which he named ‘mufflers’) which were constructed from padding and bandages. However, not everyone shared Broughton’s vision for a safer, cleaner fight, and bare knuckle boxing was still favoured in many circles.

Fighters warmed to Broughton’s rules eventually and they ended up being widely practiced until the London Prize Fighting Rules were introduced in 1838. The new rules brought refinement to Broughton’s Rules and were observed by both British and American boxers. Bouts now took place in a 24 foot square ring with ropes marking the boundaries.

Rounds lasted until a fighter was knocked down and then a 30 second recovery period was allowed for the corner crew to tend to their fighters injuries. If a fighter was unable to take his place in the centre of the ring at the beginning of the new round, he would be declared the loser.

Wrestling or hugging is not permitted.

Three minute rounds with a minute interval between rounds.

Knocked down fighters have 10 seconds to get up unassisted. If the fighter returns to his feet, the round continues until the 3 minutes is up.

Hanging onto the ropes is considered as being down on the canvas.

Only the referee is allowed inside the ring during the round.

If the fight is stopped due to unforeseen circumstances, the referee is to arrange a re-match unless both fighters agree to a draw.

Wearing boxing gloves of the best quality is mandatory.

Damaged gloves or a glove that has come off has to be exchanged.

Being down on one knee is considered down. Striking an opponent on one knee entitles them to the prize.

No sharp objects allowed on footwear.

The revised London Prize Ring Rules to be apply for any other cases.

These 12 rules were the turning point for boxing and transformed it from ruthless street fighting, to the sport we know and love today.

Modern boxing is based on these rules, however, there are some differences. Check out the modern rules of boxing here.