'Houston, we have a problem': Protestors gather outside 'Howdy Modi' rally at NRG Stadium

Hundreds of people belonging to various ethnicities came out on Sunday in Houston to hold an "anti-Modi demonstration" outside NRG stadium, where they called attention to the "racist Modi regime" and its ongoing human rights violations in India-occupied Jammu and Kashmir.

"People of every race, colour, gender, and age have taken to the streets to condemn the acts of Modi's racist regime. The mass protest stands against the supremacist government's brutal interference in Kashmir," a post on Twitter by the Pakistan Tehreek-i-Insaf said. 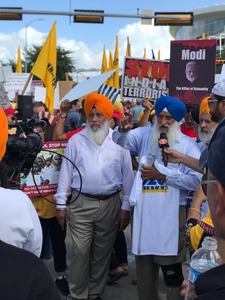 Indian Prime Minister Narendra Modi, as well as US president Donald Trump, are scheduled to speak at the NRG football stadium in Houston where community representatives say they expect 50,000 Indian-Americans for performances followed by the leaders' remarks.

One of the participants, Maria Kari, said that buses had been arranged to go around the Houston area to pick up protestors.

"There are at least three groups that have organised protest rallies," said Kari. "A lot of Muslims and Pakistanis have gathered here. Tons in fact."

The crowds beat drums, chanted slogans and some used rap lyrics as a way to communicate their message, calling for world leaders to end the suffering of Kashmiris.

Last month, the Indian government repealed Article 370 of its constitution, stripping occupied Kashmir of its special status, and imposed a strict lockdown and communications blackout in the region that has snapped off ordinary people's internet and mobile telephone service across much of occupied Kashmir. The lockdown entered its 49th day on Sunday.

Thousands have also been reportedly arrested or illegally detained.