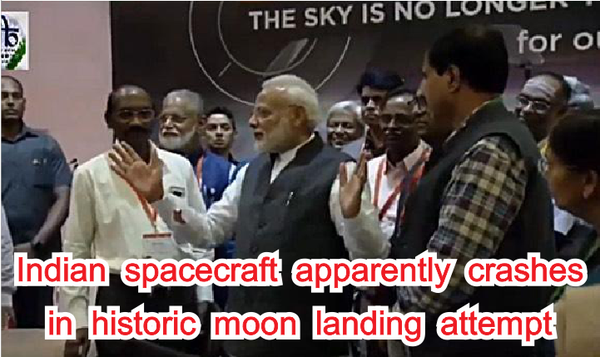 In a crushing disappointment, India's unmanned Vikram lander — carrying a small rover and the pride of a nation — apparently crash landed near the moon's south pole Friday toward the end of a seemingly smooth descent.

With Indian Prime Minister Narendra Modi looking on at the control center, the Indian Space Research Organization's Vikram lander fired its braking rockets shortly after 4 p.m. ET, kicking off what was to have been a 15-minute descent to the surface.

The Chandrayaan-2 lander, carrying eight science instruments and a small, six-wheel rover known as Pragyan, or "Wisdom," was to have spent two weeks in lunar daylight studying the moon's polar environment in a mission seen as a demonstration of India's increasingly sophisticated space prowess. 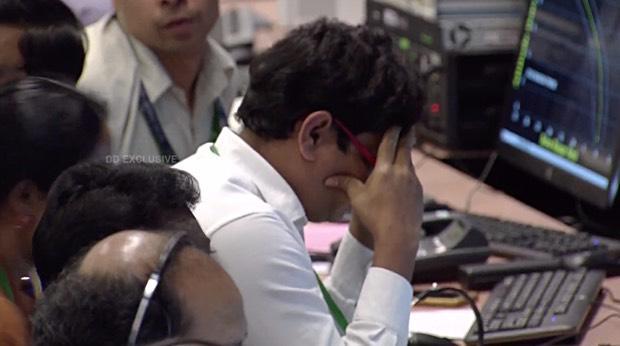 An engineer reacts to a loss of data from India's Vikram lunar lander. A computer screen at upper right shows the spacecraft's descent trajectory, with a dot representing the lander "frozen" just above the moon's surface.ISRO

A successful landing would have put India into an exclusive club, joining the United States, the Soviet Union/Russia and China as only the fourth nation in space history to pull off a successful powered landing on the moon. A sign in the mission control center read: "The sky is no longer the limit of our pride."

The initial moments of the descent appeared to go smoothly as the Vikram lander arced over and began losing altitude and horizontal velocity, firing four liquid-fueled engines in a so-called "rough braking" maneuver. The spacecraft then initiated a "fine braking" maneuver intended to carry it to an altitude of about 1,300 feet.

But at an altitude of 1.3 miles (6,864 feet) above the surface, telemetry was lost. Flight controllers, initially smiling and clapping as different milestones were achieved, suddenly grew silent as they looked at their computer screens. A display at the front of the room showing the spacecraft's altitude and trajectory appeared frozen with the lander just above the surface.

Finally, Kailasavadivoo Sivan, chairman of the Indian Space Research Organization (ISRO) went to Modi's side on a balcony above the control room and spoke for a few moments, apparently providing an update. There was no immediate indication of what might have gone wrong.

"The Vikram lander descent was as planned and normal performance was observed up to an altitude of 2.1 kilometers (1.3 miles)," Sivan said in a brief update a few minutes later that was carried on ISRO's webcast. "Subsequently, the communications from the lander to the ground station was lost. The data is being analyzed."

Before departing the control center, Modi spoke to flight controllers and science students who had been invited to watch the descent, apparently offering words of encouragement. "Be courageous," he told the gathered engineers.

There was no mistaking the disappointment in the room. 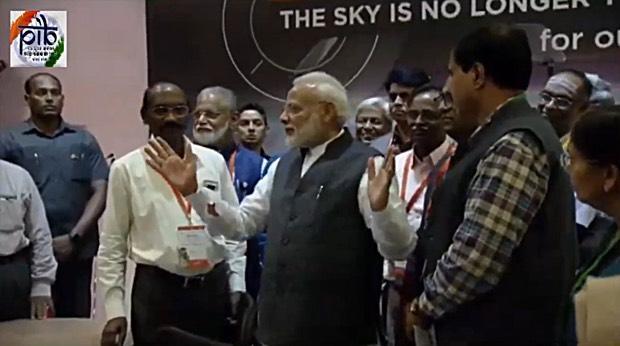 Shortly before the landing attempt, Modi tweeted that "the moment 130 crore (1.3 billion) Indians were enthusiastically waiting for is here! In a few hours from now, the final descent of Chandrayaan-2 will take place on the Lunar South Pole. India and the rest of the world will yet again see the exemplary prowess of our space scientists."

The Vikram lander made the trip to the moon along with the Chandrayaan-2 orbiter, a sophisticated science station expected to beam back data about the moon for the next year. The orbiter appeared to work normally throughout the lander's attempted touchdown and its mission was expected to continue as planned.

The overall mission — orbiter, Vikram lander and Pragyan rover — was valued at about $140 million.

The mission began July 22  when a powerful Indian booster propelled the Chandrayaan-2 orbiter and lander into an elliptical Earth orbit. The spacecraft then fired on-board thrusters in a series of carefully timed burns to raise the high point far enough to enable capture by the moon's gravity.

After circularizing its orbit around the moon at an altitude of about 62 miles, the Vikram lander separated and dropped one side of its orbit to just 19 miles or so. That set the stage for the landing attempt Friday (U.S. time).

Before the descent began, Sivan acknowledged the challenge of successfully landing on the moon but said ISRO engineers had left no stone unturned to ensure success.

"For soft landing, the success rate is only about 37% of the missions launched, but we have confidence in this landing mission," he said. "We are confident because we have enough testing, enough simulations and all the subsystem and system-level simulations. We are confident that anything humanly possible we did. But at the same time, it's a new mission. It's a terrifying moment for us."

Pre-landing ISRO videos describing the Chandrayaan-2 mission referred to Vikram's descent as "15 minutes of terror," following the lead of NASA, which famously described the Curiosity Mars rover's entry, descent and landing on the red planet in 2012 as "seven minutes of terror" from atmospheric entry to touchdown. 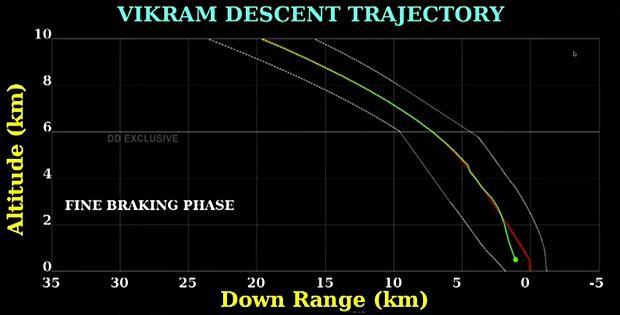 A computer display in the Indian mission control center shows the Vikram lander's descent trajectory. The spacecraft's trajectory appeared to deviate slightly from the predicted course just above the surface and the display stopped updating when telemetry was lost.ISRO

A privately funded Israeli non-profit, SpaceIL, attempted to land a small spacecraft on the moon in April only to lose contact during its final descent. Engineers later concluded the $95 million Beresheet lander crashed.

The Chandrayaan-2 mission, featuring a sophisticated orbiter, an instrumented lander and a rover, is much more ambitious, more expensive and more extensively tested. It was designed to touch down on a relatively smooth plain near the moon's south pole where the terrain has less than a 12-degree slope and large boulders can be avoided.

Because of the time it takes radio signals to make the round trip between the Earth and moon, the Vikram lander's flight computer was programmed to carry out an autonomous descent, coming down in stages, pausing in hover mode to study the surface below and identify the optimal landing site. The target was a point between two craters known as Manzinus C and Simpelius N.

Once its braking rockets began firing to drop it toward the surface, "the entire thing will be decided by the Chandrayaan-2 lander only," Sivan said before the landing attempt. "When the lander is coming down, it will take images of the place and it will compare with the image of what we stored on-board. It will find a flat surface, it will re-target, it will hover for some time and it will decide where to land and it will land. It will land autonomously in an intelligent way."

Once on the surface, the lander — named after Vikram A. Sarabhai, the founder of India's space program — was expected to beam stored descent and post-landing photos and video back to Earth and to ready the Pragyan rover for deployment. A ramp was to unfold, allowing the robotic explorer to roll down to the surface.

But it was not to be.

"I'm sure that this will give a lot of input to them, but what input it will give, don't ask me now," he said. "After the science, I can tell you."