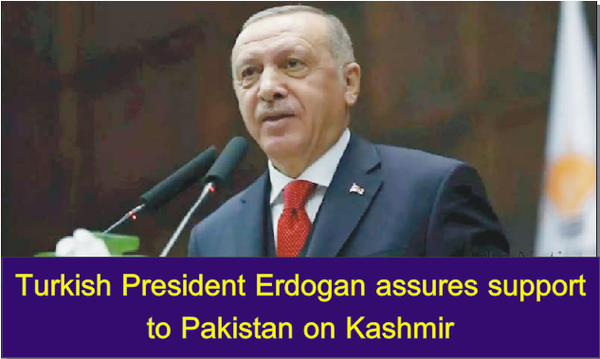 In his address, Erdogan thanked the Pakistani people and leadership over the warm welcome he was accorded upon arrival. “It is my pleasure to speak to you. I am thankful to you for giving me the opportunity to address this house.” “While in Pakistan, I feel like I am at home,” he said. "Today, Pakistan and Turkey's relations are admirable for others. During difficult times, Pakistan has supported Turkey," Erdogan said. “Our friendship is based on love and respect. Pakistan’s pain is our pain,” Turkish president said.

While quoting a poem by poet Allama Iqbal, Erdogan said: "Yes, like the poet of Lahore, people were drowning in these emotions, people of Pakistan had supported Turkey. "We can never forget the support of the Muslims of the subcontinent during those times. "How can we forget those [Pakistanis] who prayed for Turkey? Our friendship is not based on vested interests but on love. "When there were earthquakes in Turkey, they [Pakistanis] supported us. I am thankful on behalf of my country for the support of Pakistan.

"Like in the past, we will continue to support Pakistan in the future," he vowed. "Pakistan is on the way to peace and stability; peace and stability doesn't come in a few days, it requires work. "We applaud Pakistan's efforts to to rid this region from terrorism. The country has been affected by terrorism. "Pakistan and Turkey are the countries that have been most affected by terrorism due to their geographic location [...] we will continue to cooperate with Pakistan on counter-terrorism," he declared.

Speaking about the issue of occupied Kashmir, the Turkish president said that Indian-occupied Kashmir meant to Turkey exactly what it had meant to Pakistan over the years. "The relationship between Pakistan and Turkey will continue in the future like it has in the past," he added. "Our Kashmiri brothers and sisters have suffered from inconveniences for decades and these have become graver.""The Kashmir issue can be resolved not through conflict but through justice and fairness. Such a solution will be in the interest of all parties. Turkey will continue to stand by justice, peace and dialogue.

"On this occasion, I would like to emphasise that we appreciate Pakistan's positive contributions to the peace process in Afghanistan. "The strategic economic framework and action plan texts we will sign today will cover a wide range of industries from trade to infrastructure [...] and constitute a road map for us," he said. In his speech, the Turkish president also said that Turkey had supported Pakistan on matters related to counter terrorism. "We assure Pakistan of Turkey's support at the Financial Action Task Force," Erdogan said.

"The positive steps taken by Pakistan with regards to investment and trade are improving conditions for business in the country. Economic progress is not achieved in a few days, but takes constant effort," the Turkish president said.  Moreover, while talking about 'deal of century', Turkish President Erdogan said, "No distance can build a wall between the hearts of believers. If there is torture against any believers in the world, it our duty to help them. "Especially over the past few days, when [US President Donald] Trump and [Israeli Prime Minister Benjamin] Netanyahu took a step about Al-Quds.

"This is not a peace plan, this is a takeover plan," said Erdogan. "The plan of the 'deal of the century' is not a peace project but in fact, a project for occupation. "When the American administration announced this plan as 'the deal of the century', we gave the biggest reaction to this plan." The Turkish president had earlier reached the parliament house to address the joint session of the parliament. Prime Minster Imran Khan greeted the Turkish president on his arrival at the Parliament House. Chairman Senate Sadiq Sanjrani, Speaker of the National Assembly Asad Qaiser, Governor Sindh Imran Ismail, and other top officials, including the service chiefs of the armed forces, were also present on the occasion.