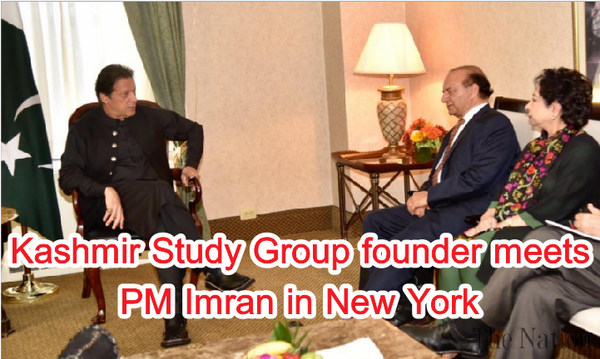 During the meeting, the prime minister urged Kathwari, a Srinagar-born Kashmiri-American, to further highlight the grave situation resulting from India’s illegal occupation of occupied Kashmir and its blatant human rights violations so as to expose the real face of Indian Prime Minister Narendra Modi’s government to the world Kathwari on the occasion highlighted the Kashmir Study Group’s earlier engagement on the dispute and efforts for conflict resolution.

Foreign Minister Shah Mehmood Qureshi, Advisor to the Prime Minister on Commerce Abdul Razak Dawood, Special Assistant to the Prime Minister Naeem-ul-Haq, Pakistan’s Ambassador to the United Nations Maleeha Lodhi, Ambassador to the United States Asad Majeed Khan and other senior officials were present in the meeting. Earlier, Foreign Minister Qureshi told reporters that the prime minister wanted to listen to Kashmiris from both parts of Kashmir ahead of his speech to the UN General Assembly on September 27

Qureshi said the main objective of prime minister’s visit to US was to highlight the Indian atrocities in the valley. Speaking to the media in New York, the foreign minister said PM Imran will hold meetings with heads of different states and Kashmiri delegation. The foreign minister added that the Ehsaas Programme launched in Pakistan will also be discussed during these meetings as this program is very important to achieve sustainable development goals.