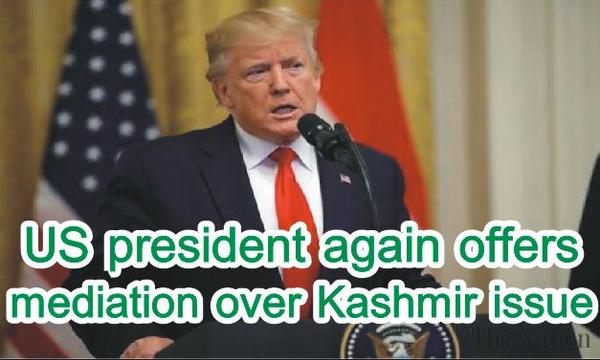 US President Donald Trump on Wednesday once again offered to mediate between Pakistan and India over the Kashmir issue. While speaking to reporters in the Oval Office, Trump said he would do his best to mediate or help somehow with the tensions between India and Pakistan over the disputed Himalayan region.

“Well, they’ve been having this — these talks for hundreds of years, even under different names. But this is — but its Kashmir. And Kashmir is a very complicated place. You have the Hindus and you have the Muslims, and I wouldn’t say they get along so great. And that’s what you have right now,” Trump said when asked if the issue between the two nuclear-armed neighbours was solvable. The US added, “You have millions of people that want to be ruled by others and maybe on both sides. And you have two countries that haven’t gotten along well for a long time. And, frankly, it’s a very explosive situation.”

“I spoke to Prime Minister Imran Khan. I spoke with, yesterday, also, Prime Minister Modi. They are both friends of mine. They are great people. They are great people. And they love their countries. And they’re in a very tough situation,” Trump added. He noted that Kashmir was a very tough situation. “And, you know, we’re talking about — this has been going on for decades and decades. Shooting. I don’t mean shooting like shooting a rifle, I mean like major shooting of howitzers, of — you know, of heavy arms. And it’s been going on for a long period of time.”

“But I get along really well with both of them. As you know, Prime Minister Khan was here just recently. And I was with — I’m going to be with Prime Minister Modi. I’ll be with him over the weekend in France,” he added. He once again reiterated his help and said, “I think we’re helping the situation. But there are tremendous problems between those two countries, as you know. And I will do the best I can to meditate or do something. Great relationship with both of them, but they are not exactly friends at this moment. Complicated situation.”Trump added he would speak to the Indian prime minister regarding the issue in occupied Kashmir over the weekend at the G7 summit in France.