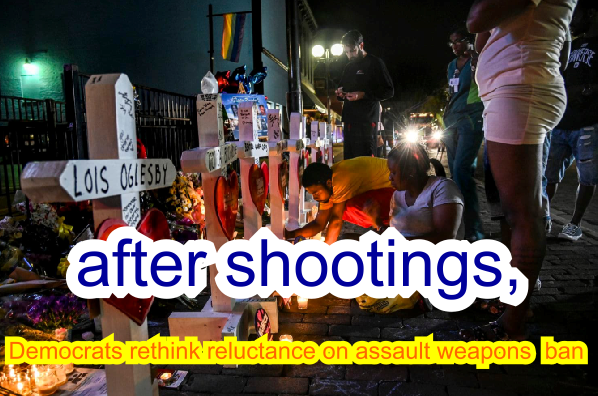 The mass shootings in El Paso and Dayton, Ohio, are prompting Democrats to reevaluate their long-standing hesitation on an assault weapons ban, propelled by an influential grass-roots movement demanding more aggressive action on guns and the party’s growing political strength in the suburbs.

Former president Bill Clinton threw fresh momentum behind the effort on Thursday, calling for the reinstatement of the ban in an essay for Time magazine. Joe Biden, the former vice president whose role in the 1994 crime bill had become a political liability in the Democratic primary, has repeatedly touted that same law in recent days, because it also contained the 10-year ban, which applied to certain semiautomatic weapons.

Those developments come even though such a ban has long been considered the third rail of gun politics for Democratic lawmakers, who have struggled to advance the policy on Capitol Hill even when they controlled Congress because of reluctance from rural Democrats and those who blame the ban for the party’s wipeout in the 1994 midterm elections. The prohibition was allowed to expire in 2004 during Republican control of Congress and the White House.
But the weekend’s shootings — the shooter in Dayton used a modified military-style pistol, while the gunman in El Paso had an AK-47 rifle variant, according to authorities — are prompting many Democrats to rethink the issue.

The Democrats who oppose such restrictions, Murphy said, are an “expiring breed.”
Still, few believe an assault weapons ban is likely to advance in Washington anytime soon. President Trump said this week that there is “no political appetite” for such a ban, even as he publicly touts the possibility of expanded background checks despite private resistance from gun-rights advocates.
The verdict is split on how effective the 1994 ban was on reducing gun violence. The Justice Department said in 2004 that the ban’s impact was mixed because of exemptions written into the law, such as allowing copycat weapons to be sold.

More recently, the Journal of Trauma and Acute Care Surgery published a study in January that analyzed mass shooting data between 1981 to 2017, and found that 70 percent of the mass shooting deaths during the years when the assault weapons ban was not in effect would have been prevented had the weapons been barred. That study, however, has been criticized over its definition of what constitutes an assault weapon.

More than 16 million AR-15s and similar models have been sold in the United States since 1990, according to the National Shooting Sports Foundation, a trade organization representing the gun industry.
Instead of an assault weapons ban, the Democratic-led House has pushed legislation expanding background checks — a policy that is much more politically palatable, particularly in the suburban areas where the party made significant gains in last fall’s midterms. Legislation written by Rep. David N. Cicilline (D-R.I.) to reinstate the ban has nearly 200 co-sponsors, and he says he is continuing to talk to lawmakers to build support, including Democratic freshmen and Republicans.

“When we’re in the position and when I’m confident we have the votes to pass it, I’ll press the leadership to bring it to the floor,” Cicilline said Thursday. “We’re not there yet.”

And the GOP-controlled Senate may struggle to advance milder gun restrictions, such as a bill encouraging states to enact “red flag” laws, which empower the courts to bar firearms from people determined to be a threat to themselves or others.
In an interview Thursday with WHAS radio in Louisville, Senate Majority Leader Mitch McConnell (R-Ky.) said expanding background checks for gun sales and implementing red flag laws will likely be the focus of any firearms debate in the Senate. But he said an assault weapons ban will also probably be discussed.

Alan Gottlieb, the chairman of the Second Amendment Foundation, said Thursday that he has spoken to the White House about a range of ideas on curbing access to firearms, particularly for those deemed unfit to possess them. He said there is “no way” the White House would back an assault weapons ban.

“There’s no justification for banning those because less than 1 percent ever get misused to start with,” Gottlieb said. “There are millions in civilians’ hands right now. What are you going to do, go door to door and confiscate them?”

A Senate test vote on an assault weapons ban in 2013 picked up only 40 votes in its favor. But nine of the 16 Democratic senators who opposed reinstating it are no longer in office. Sen. Michael F. Bennet (D-Colo.) voted against the ban six years ago, believing it was overly broad, but now as a presidential candidate says he generally supports a ban.

Sen. Joe Manchin III (D-W.Va.), perhaps the most gun-friendly Democrat in the Senate, is open to looking at all options when it comes to restricting firearms, according to an aide.

“Guns, overall, is an issue where voters have moved much faster than popular political belief,” said Angela Kuefler, the senior vice president of research for Global Strategy Group who has done extensive research on public sentiment toward guns. She said public support for an assault weapons ban has consistently hovered in the mid-50s and mid-60s.

Still, public polling also underscores a deep partisan divide when it comes to some form of a ban on military-style rifles.

A July NPR-“PBS NewsHour”-Marist poll found 57 percent of the public supported a ban on “the sale of semiautomatic assault guns, such as the AK-47 or the AR-15.” Fewer than 3 in 10 Republicans supported the proposal, rising to a slight majority of independents and more than 8 in 10 Democrats.

“Part of the issue is that background checks sounds like keeping guns out of the wrong hands. It sounds like it’s about the bad people that are doing things,” said Lanae Erickson, a senior vice president who has studied gun policy at Third Way, the center-left think tank. “The assault weapons ban makes it about the gun. And that’s really where, for some, the politics shift.”

Proponents of an assault weapon ban — which was signed into law in September 1994 and expired a decade later — argue that its impact in the 1994 midterm elections has been increasingly exaggerated over the years, while other factors, such as a failed attempt to overhaul the nation’s health-care system, have been downplayed.

For others, the political impact of the 1994 assault weapons ban is undeniable.

Former representative Richard Swett (D-N.H.) was swept out of office in the 1994 Republican wave. In an interview Thursday, he recalled a campaign season that fall that “was like hell,” as gun-rights advocates confronted him across his district about his vote supporting the assault weapons ban.

A white truck would follow him as he traveled throughout his district, with a sign that read “Swett Lies.” Once he lost reelection, some New Hampshire residents proudly touted bumper stickers that read: “I fired Dick Swett.”

Asked how much of his loss was due to the assault weapons ban, Swett responded: “Probably 100 percent.”

“But it wouldn’t change my vote,” he added. “The problem has only gotten worse.”

In his memoir, Clinton argued that the assault weapons ban significantly juiced turnout among Republican voters and that the National Rifle Association “outspent, outorganized, outfought and outdemagogued” supporters of the ban. Democrats lost more than 50 seats in the House and eight seats in the Senate that November.

If some congressional Democrats remain skittish about embracing an assault weapons ban, Republicans have been virtually immovable.

In the House, Rep. Michael R. Turner (R-Ohio), who represents Dayton, said this week that he now supports barring the sale of military-style guns to civilians. Rep. Brian Mast (R-Fla.) came to a similar conversion, announcing his support of an assault weapons ban soon after the shooting at Marjory Stoneman Douglas High School in Parkland, Fla., his home. One of the 17 killed had been a friend.

But those views are rare among House Republicans. In the Senate, an aide for Sen. Susan Collins (R-Maine), one of the GOP senators most willing to support gun restrictions, said only that the senator supported the assault weapons ban when it was in place.

“The Second Amendment clearly applies to commonly owned firearms, and these are among the most popular and most widely owned firearms in America,” said Sen. Patrick J. Toomey (R-Pa.), who wrote legislation in 2013 that expanded background checks to nearly all gun sales, of assault weapons.

Law-abiding owners of assault weapons, Toomey said, are “never going to be a threat to anyone.”