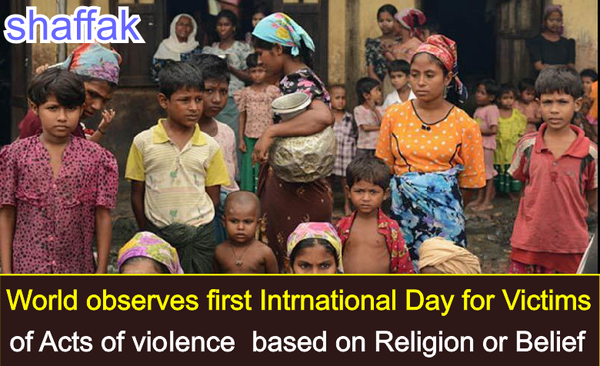 The international community observed the first International Day Commemorating the Victims of Acts of Violence Based on Religion or Belief on Thursday, as reports of atrocities in Myanmar, occupied Kashmir, Syria and Palestine — among other parts of the world — continue to surface.

August 22 was designated as the International Day Commemorating the Victims of Acts of Violence Based on Religion or Belief in a May 28 meeting of the United Nations General Assembly (UNGA).

The international day aims to honour the victims and survivors of heinous acts who often remain forgotten.

UNGA Secretary General Antonio Guterres, in a message to commemorate the day, said that the trauma from terrorist attacks "causes lasting damage to families, communities and nations as a whole".

He called for the international community to do all it can "to ensure that victims’ voices are heard, their rights respected, and their recovery supported".

Prime Minister Imran Khan used the occasion to highlight the plight of millions of Kashmiris "living under brutal Indian occupation, abuse and violence, deprived of all fundamental rights and freedoms".

"The Indian occupation forces have even denied them their right to observe their religious practices, including Eidul Azha.

"As the world shows solidarity for victims of violence based on religion and belief, it must also move to prevent an impending genocide of Kashmiris in IoK," he urged.

When the decision to commemorate the day was made in the UNGA, Jacek Czaputowicz, Minister for Foreign Affairs of Poland, had said that any acts of violence "against people belonging to religious minorities cannot be accepted".

"Hatred towards religious groups may lead to mass killing of innocent people," he cautioned, citing reports that one third of the world’s population suffers from some form of religious persecution.

"Acts of terror are intended to intimidate members of religious communities and, as a result, to hold them back from practising their faith.

"In some countries, religious practice is forbidden even at home, and sometimes the representatives of religious minorities are refused religious funerals," he said.

Representatives of the US, China, Egypt, Brazil and Iran also spoke at the time and stressed upon the importance of raising the issue of growing violence in various regions of the world.