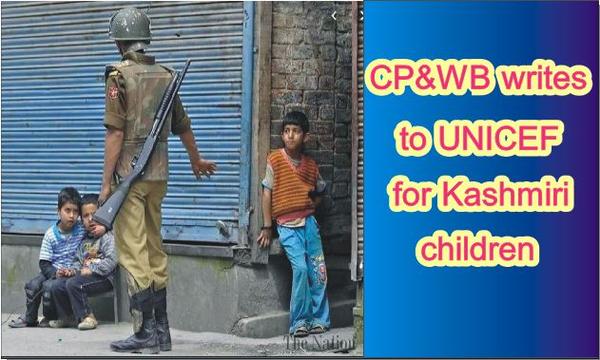 The Child Protection and Welfare Bureau (CP&WB) Chairperson Sarah Ahmed has written a letter to United Nations International Children’s Emergency Fund (UNICEF) in which she has directed the attention of UNICEF towards children suffering in occupied Kashmir .

The letter has been written to UNICEF Executive Director Henrietta H. Fore. The letter states that Child Protection & Welfare Bureau writing this letter to bring to your attention the current situation in Indian occupied Kashmir. It states that the atrocities that have taken place in recent weeks are a grave violation of human rights.

Sources have reported that children are being abused, molested and facing unimaginable horror every day. It has been written in the letter that as a United Nation’s organization, UNICEF is the only inter-governmental agency devoted exclusively to children and is mandated to promote and protect children’s rights and their well-being. It urged UNICEF to intervene and help the children of Indian occupied Kashmir.

It said, “Children in the area need UNICEF to focus its attention on the constant suffering that’s taking place and deliver its promise of a safe and inclusive environment that is a right of every child in the world.”