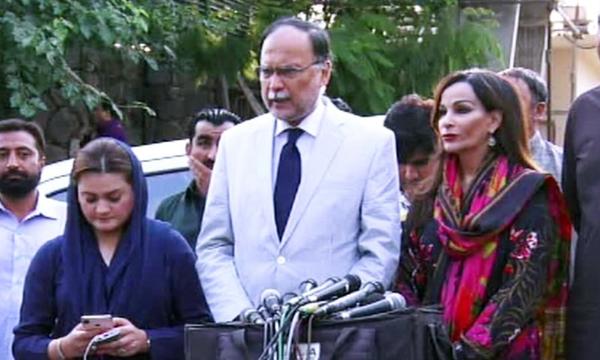 In a joint press conference held in Islamabad with the PML-N, the PPP announced on Tuesday that it seeks to ensure "there is no unilateral action on a long march to Islamabad" — a reference to JUI-F leader Maulana Fazlur Rehman's call to rally against the government.

PPP stalwart Sherry Rehman, flanked by PML-N leaders Ahsan Iqbal and Marriyum Aurangzeb, said that "whether there is a long march or a rally, it must not be a unilateral announcement". She said to ensure this, a schedule of meetings had been developed which will take place between PPP, PML-N and JUI-F to ensure they have a joint strategy in place to oust the government.

A meeting, in this regard, was held today between PPP chairman Bilawal Bhutto Zardari and PML-N President Shehbaz Sharif.

To a question by a reporter regarding the next course of action "after toppling the government since there doesn't appear to be any sign of readiness for election", the three leaders all jointly declared the parties were ready.

"You know and I know. Which election did he win?" quipped Rehman, in a thinly veiled reference to the prime minister. "He came down from the heavens."

Both party's representatives decried the government's "failures", especially at the United Nations General Assembly, where Rehman pointed out that "not even 16 votes could be obtained" to pass a resolution in the Human Rights Council for Kashmir.

"We are not talking about any [meeting] dates today, but you will see various meetings being held over the next 4-5 days," added Rehman.

She said that there were "no gaps" from the PPP's side and that the party seeks to persuade the JUI-F chief to work together with them.

"The opposition parties will unite and stand together in their resolve to rid this country of this government and the situation we are trapped in; the only democratic solution is a fresh election," said Iqbal.

"Today we have agreed on the fact that all the opposition parties must develop a joint strategy against the government in consultation with JUI-F leadership. For this purpose, the PPP chairman plans to meet Maulana sahib and tomorrow, a PML-N delegation will meet him," he said, referring to the JUI-F chief.

"There is complete agreement between the PPP and PML-N that the fight against the government has to be fought from the opposition platform. And all parties are in agreement over the fact that the ouster of this government is a forgone conclusion," the PML-N leader added.

The relationship between the JUI-F and the PPP had turned sour after leaders from both parties accused each other of playing politics over the issue.

The PPP had expressed unwillingness to participate in the anti-government movement because of the inclusion of the issues of blasphemy laws and Namoos-i-Risalat on its agenda. Moreover, both the PPP and the PML-N had also opposed the idea of holding an indefinite sit-in, as the PTI did in 2014.