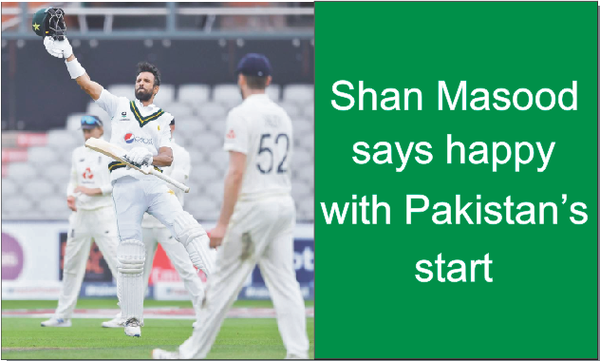 LAHORE - Opening batsman Shan Masood said he was content with how the first day progressed for his team despite rain making for a stop-start day.  Masood batted out 152 balls and remained unbeaten alongside a fluent Babar at the close of play. He was unbeaten on 46 at stumps, having stitched together a 96-run partnership with Babar Azam. Pakistan chose to bat first despite overhead clouds and Masood justified the decision by batting through the new ball spell.

Addressing the press conference at the end of the day’s play, Masood said: “When you bat first, as an opening batsman, you want to back that decision. Collectively as a team we took that decision of batting first. It was very important to negate that new ball, knowing that England have world-class bowlers, especially in their home turf. And they bowled well, they bowled in good areas, they hardly gave anything away initially.

“As a team, being in that stop-start position is not always easy because you have to switch on, switch off, and switch on back again,” he said about the weather. “These are the challenges of Test cricket, especially in England where we all know about the weather. We were very happy that we got through that period and hoping that tomorrow, providing the weather is fine, we make a decent start count.

“Every time there’s a stop-start, you have to apply yourself each time, it’s like a lunch break or a tea break, or resuming the next day. All the batsmen need some time. “It was important for us in the final session, with play not looking likely to extend much, to keep the wickets intact. We maintained a reasonable run-rate against a side that looks to dry up the runs. We scored at close to three runs an over, it’s a good platform for us to build on,” he added. Praising the top batsman of the world, Babar Azam, Masood said: “I’ve always enjoyed batting with Babar Azam and there’s no doubt that it’s a good thing for Pakistan that we have a batsman in our side who ranks among the top batsmen in the world, in all three formats.

“Babar’s quality is such that ... when the ball slowed down or did not come on to the bat, he had good reflexes and hands that he still punished the bowlers. “Once he got set, the run-flow increased, and once that happened the opposition got a bit disturbed. Runs are important and the run-rate, from today’s perspective and the conditions on offer, we maintained it well, ran well between wickets.  “Babar always looks for the single and a left-right combination is also important. And he is a quality player and when he’s batting the opposition is always under pressure.”