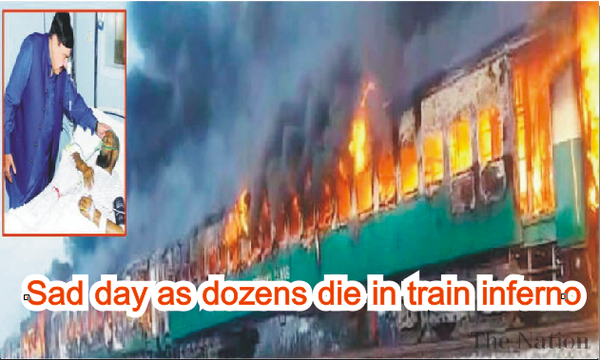 Lahore - More than 70 people died and around 40 injured yesterday in a devastating fire which engulfed three bogies of a fast-speed train near Liaquatpur city of Rahim Yar Khan district in southern Punjab. The fire in Tezgam train, coming from Karachi and heading to Rawalpindi, was caused by cooking gas stoves when some passengers were preparing their breakfast, Railways Minister Sheikh Rashid said in a television interview after the accident.

“Two stoves blew up when people were cooking breakfast, the presence of kerosene oil with the passengers in (the) moving train further spread the fire,” he said. Train driver Muhammad Siddique said the fire started at 6:18 in the morning. Fanned by wind, the fire starting in one compartment quickly spread to two other bogies, catching most passengers off guard. Many people saved their lives by jumping off the train but But all of them weren’t lucky enough as most of the deaths occurred from head injuries received by passengers after hitting the ground, Sheikh said. The people responsible for the unfortunate incident belonged to Tableeghi Jamaat and were headed towards Raiwand, near Lahore, he added. “The burning carriages were detached from the locomotive to save other carriages,” he said.

The dead and injured were shifted to DHQ Hospital in Liaquatpur. Some of the injured were also taken to Bahawal Victoria Hospital in Bahawalpur due to their critical condition, according to Rahim Yar Khan district government. TV reports by the night said the death toll had surged to around 74 amid fears of further rise. A Rescue service official also confirmed 74 fatalities. Prime Minister Imran Khan, President Arif Alvi and a number of other government officials as well as opposition leaders expressed deep grief over the national tragedy. Rescue 1122 teams had extinguished the fire and were carrying out a cooling and search operation under the supervision of the Railways minister.

Army troops including doctors and paramedics were also dispatched to assist rescue teams in the operation, a statement by the Inter-Services Public Relations said. An Army helicopter was also dispatched from Multan in order to rescue the injured, it added. Punjab Health Minister Dr Yasmin said that about 40 people, including women and children, were injured. She said that only 18 of the bodies were identifiable and DNA analysis would be needed to identify rest of the bodies which are charred beyond recognition. An injured man, who was travelling in the same compartment where the fire started and saved his life by jumping off the train, told the media that the passengers carrying the cylinder first used it to reheat pottage and then make tea. The blast came when they were make tea for a second time, he said.

Not all those who leapt from the fast moving train were lucky enough. Some of the victims were killed by head injuries sustained as they jumped from the moving train, said Muhammad Nadeem Zia, the medical superintendent at the District Headquarters Hospital in Liaquatpur. Railways Minister Sheikh Rashid, in a video message, announced that a compensation of Rs1.5 million will be paid to the heirs of the deceased while Rs500,000 will be provided to those who are injured. He said the passengers sneaking stoves into trains to prepare meal on long journey is a common problem. He added that two of the carriages that caught fire were booked in the name Ameer Hussain, a Tableeghi Jamaat emir.

The minister blamed the passengers but also called it a ‘failure’ of the Railways authorities who had failed to carry out thorough checking of the passengers’ luggage. Pakistan Railways Divisional Officer Multan Division Nabila Aslam told a TV channel that the passengers must have “hidden the gas cylinder in their luggage” while boarding the train as bringing one on-board is strictly prohibited. Later, in a press conference, the railways minister said the passengers using the cooking gas cylinder had been warned by a guard and the driver. “They turned off the stove in front of the guard, but when he left, they turned it back on,” he claimed.

He said that 134 trains had been making a minute-long stop for passengers in Raiwind. “The whole world earns from freight and we are the only ones who earn from passengers,” he said, adding that the ministry was now earning upto Rs180-190 million versus the previous Rs130 million figure. “And then this tragedy unfolded.” Tezgam, one of Pakistan’s oldest and most popular train services, runs between Karachi to Rawalpindi. The fare for a single journey from Karachi to Rawalpindi ranges from Rs1,750 for an economy seat to Rs7,650 for an AC Sleeper berth.

The railways minister thanked all those who participated in rescue operations especially Pak Army ambulances who saved many lives by transporting them quickly to hospitals. Rashid rejected the impression that there was a non-availability of “pull chains” to alert the driver to stop the train. “The train stopped due to the chain being pulled, otherwise the whole train would have been on fire.” When asked about whether he will resign from the ministry, Rashid said he will speak about the matter on Sunday. He said an inquiry will be conducted within 15 days and the parties responsible punished. The minister also paid a visit to the Shaikh Zayed Hospital in Rahim Yar Khan where some of the injured were being treated. He instructed the hospital staff to ensure the best possible treatment to all those wounded.

Prime Minister Imran Khan said he was “deeply saddened by the terrible tragedy of the Tezgam train”. “My condolences go to the victims’ families and prayers for the speedy recovery of the injured. I have ordered an immediate inquiry to be completed on an urgent basis,” he said via Twitter. A notification was also issued by the Railways ministry’s Rawalpindi division office soon after the incident directing police officials posted at stations as well as crew members, including guards, attendants, carriage staff etc. to ensure that no gas cylinder is allowed on board trains. “It will be the joint responsibility of the running crew to confiscate gas cylinders being used by the passengers in running trains,” the notification said. “[Staff] on stations must have a joint responsibility to keep watch on the activities of the passengers and in case any unusual thing is happening, [they] must report it for timely eradication.”

President Arif Alvi “expressed profound grief on the loss of precious lives in the tragic blast”. Human Rights Minister Shireen Mazari extended “prayers and condolences” to families of the victims of the “terrible Tezgam train tragedy”. PML-N President Shehbaz Sharif said he was “heartbroken at such a massive train tragedy” and offered condolences to the bereaved families.  “Tragedy must immediately be investigated and accountability ensured,” said PPP chairman Bilawal Bhutto Zardari. “PM should keep his pre-election promise and sack the minister until investigation is complete.” Jamiat Ulema-i-Islam (Fazl) Chief Maulana Fazlur Rehman issued a condolence statement and said that such events were a result of “poor planning”. He demanded a thorough probe into the incident. Leaders of Majlis Wahdat-e-Muslimeen, Pakistan Awami Tehreek and Millat-i-Jaferia Pakistan also extended condolences to victims’ families and called upon authorities to ensure that the injured are provided with the best medical treatment and to hold a thorough inquiry into the incident.