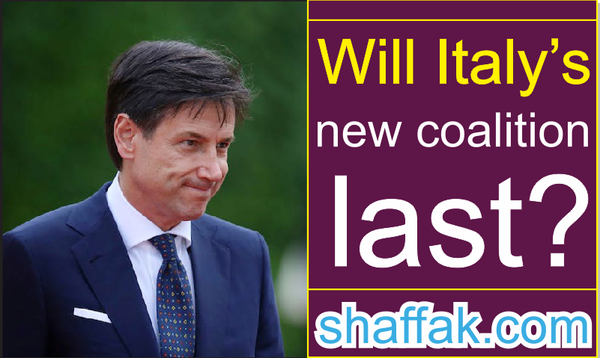 Italian politics is like a game of musical chairs. One government resigns or collapses, another takes its place, until that government is either rendered irrelevant a year later or voted out during the next election. Italy has had 68 governments in the last 74 years and 10 prime ministers in the last 20.

Italians will get another prime minister sworn in relatively soon, and the new one is the same as the old. Guissspe Conte, a quiet law professor only 15 months ago, will stay on as Italy’s premier after surviving an attempt by his hardline interior minister Matteo Salvini to force an early election. Salvini’s desire for power, propelled by his love of politicking, his boisterous personality, and his desire to move Italy far to the right, convinced him to pull the plug on the short-lived populist coalition government to which he was a part. What Salvini didn’t envision, however, was two long-time political enemies teaming up in order to keep him out of the prime minister’s office.

The new ruling coalition between the Five Star Movement (5SM) and the Democratic Party (PD) is a case of two entities with competing interests, history, and ideology trying to make it work in order to prevent Italy from becoming Salvini’s playground. Salvini, now banished to the opposition, has called the 5SM-PD government an anti-Salvini front – and in many ways the ex-interior minister is right. The 5SM is an anti-establishment party born to rip the system to shreds and bring power back to the grassroots. The PD is the very definition of establishmentarian, having ruled Italy in one form or another for decades. Meshing these two organisations into the same government is like forcing two estranged siblings into the same room and hoping they kiss and make up before killing each other. The 5SM-PD government is something cooked up in the laboratory, and may prove to be less durable than the government it was tapped to replace.

We still don’t know what policies Rome’s new overlords will be working for. The incoming foreign minister, Luigi Di Maio, claims that ‘this government will be neither on the left or on the right’, as if centrism and moderation will prevail after over a year of Salvini’s carnival barking. While a policy platform is still very much in flux, it’s difficult to see Italy’s new administration as being as prickly to the European Union as it was when Salvini was guiding the agenda. Italy, a founding member of the EU, has become a problem child, picking fights on everything from budget and spending rules to asylum and economic sanctions. Relations between Brussels and Rome could use a rapprochement or at least a détente, one the pro-EU PD may be able to deliver.

And then there is immigration, a sore point that has divided Italy from many of its European neighbours. Salvini’s oversight of law enforcement and border policies made Italy look like a walled-off country, one that equated migrants taking to rubber boats en route to Europe to enemies of the state. Italian ports have been closed to rescue ships which have been circling the Mediterranean searching for distressed migrants. Captains who breach the no-port policy are at risk of massive fines, arrest and impoundment of their vessels. The hardline policy won Salvini significant popularity with Italians who were fed up with being Europe’s welcome mat for hundreds of thousands of people seeking opportunity and is partly responsible for making the Lega’s status the country’s most popular party. With Salvini out of government, Prime Minister Conte could decide to loosen some of the restrictions, perhaps by reopening Italy’s southern ports in certain circumstances.

If the new coalition works out, Italians won’t have to go back to the polls to elect a new one until 2022. Very few if any political prognosticators in Rome are betting this will actually happen, but for Italians used to politicians acting like babies, it’s a nice thing to imagine nonetheless.

If the new coalition doesn’t last, however, make no mistake – Salvini’s ouster could turn out to be a temporary arrangement.